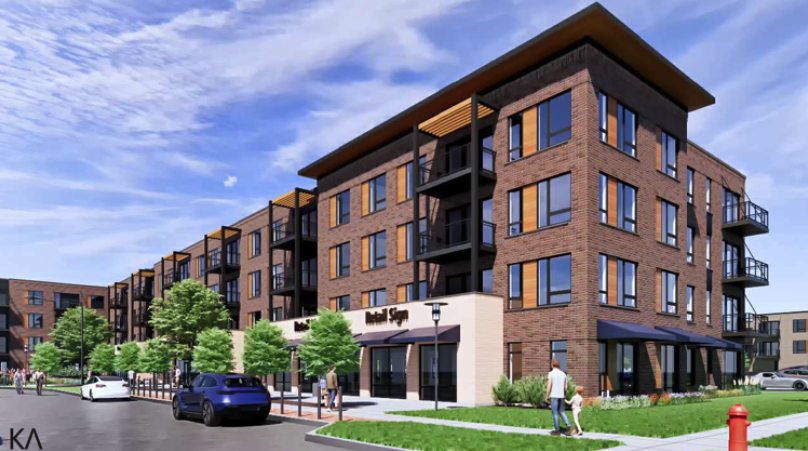 SHEBOYGAN – Significant progress has been made on infrastructure for the North Town development in the Town of Sheboygan, setting up construction of the first buildings in spring 2023. This includes a recently-approved Hilton Home2 Suites hotel.

Since ground was broken in June, crews have been putting the infrastructure in place for the massive project, which is one of the biggest in Sheboygan County history. According to Van Horn Development Director Chris Merklein, all roads have been cut in, sanitary and storm water systems are nearly complete, and grass has been planted in what will be the town square.

In early January, construction will begin on a large retaining wall adjacent to a wetland area, with completion expected by the middle of the month. After a brief slowdown in winter, work will resume in early spring, with graveling of the roads and setting up of utilities such as electrical, internet and natural gas taking place.

Spring will also see the start of building construction, with the first mixed-use building and a Hilton Home2 Suites extended stay hotel leading the way. The four-story, 93-room Hilton, which was approved by the Town of Sheboygan Board in November, will be a valuable asset to the area, according to Merklein.

“It’s going to add a great tax base for the Town of Sheboygan, and it’s going to serve a much-needed niche. There’s a gazillion really good privately-held companies here that have a lot of white collar traveling workers that need to stay in town for a week or two or a month, and this is a great product for them,” said Merklein.

Progress is also being made on bringing additional businesses to North Town. One company has already signed a letter of intent to fill 7,000 square feet of retail space in the mixed-use building, according to Merklein.

Commercial real estate company NAI Pfefferle is working with Van Horn to bring in tenants, and Merklein said they have received significant interest so far. “They’ve had many conversations with prospective commercial and retail tenants who want to be part of North Town. Once we get the ball rolling, we expect them to fall pretty quick.”

Merklein said this will particularly be the case after the first structures are built next year. “Wait until you see these first few buildings. They are going to be absolutely beautiful. From the landscaping to the material to the design once you’re inside, it’s going to be unlike anything else in Sheboygan County or Southeast Wisconsin.”

“Once people see this and go on site and feel the sense of place that North Town’s going to have, it’s going to start to click, and I think businesses are going to sign up pretty quick when they see the activity and the feel that we have here at this development,” said Merklein.

When finished, North Town will have 100,000 square feet of retail space, 600 residential units divided between apartments, town homes and single-family homes, and a town square with retail, dining and professional services.

When asked about the timetable for final completion, Merklein was optimistic the project will exceed initial expectations. “The development agreement we have with the Town of Sheboygan is that we need to build at least $48 million of taxable real estate within ten years of signing that agreement. We’re nine years away from that, and we will far surpass that dollar number way before 10 years. We’ll surpass it this year more than likely.”

North Town is the largest in a series of recent developments in the Town of Sheboygan, which has turned into one of the most sought after areas for commercial and residential construction in the county. Town Board Chair Dan Hein is pleased with the growth the town has experienced, and sees the trend continuing.

“It’s very exciting to see all the new development happening. The town is growing a lot, and this development just adds to part of our plan. It’s nice that this property is going to remain in the Town of Sheboygan. That was our intent from the very beginning,” said Hein.

Since the development will be happening in waves, leaving multiple lots vacant before final completion, Merklein wanted to assure the public that the entire property will be well-maintained throughout the process. “This is going to be a high-end development. We will maintain the vacant lots to a very high standard.” This includes planting fast-growing grasses that will prevent both soil erosion and air pollution to the surrounding neighborhood.

We would love to have you visit soon!